Do you know what REM sleep is? If not, then you're in for a treat. It's a fascinating part of what your brain and your body go through each night while you rest. Although there are still some aspects of REM sleep that scientists are struggling to understand, the importance of REM sleep for your overall health and wellness cannot be overstated. If you keep reading, you'll learn more about what REM sleep is, why you need it, and how to get more of it.

What Is REM Sleep?

The acronym R.E.M. is short for "rapid eye movement". This creative label stems from the fact that when people first started researching sleep, it was readily apparent that the eyes dart back and forth in random, rapid patterns during this stage of the sleep cycle. Almost all of your skeletal muscles are paralyzed during REM sleep, a condition known as "atonia". This natural adaptation helps protect humans - and other animals that dream - from physically acting out said dreams and potentially harming themselves or others.

Brain wave activity drastically changes during REM sleep compared to the other stages of the sleep cycle. While in REM sleep, the brain emits Alpha, Theta, And even high-frequency Beta waves. Such Beta waves are unusual due to the fact that the brain typically reserves high frequency Beta wave states for wakefulness. This has led some researchers to affectionately refer to REM sleep as "paradoxical sleep". The two terms are used interchangeably in the scientific community. 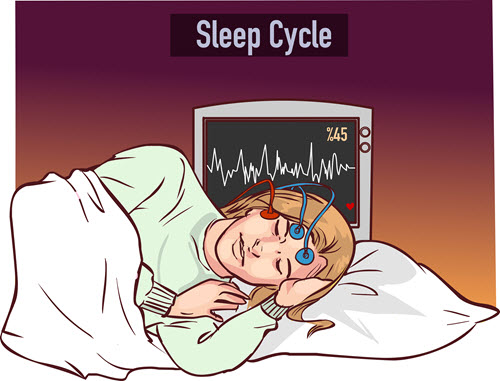 What Happens During REM Sleep, and Why Is it So Important?

Certain areas of the brain are more active during REM sleep than at any other time. Based on current research, the prevailing theory is that REM sleep helps process, consolidate, and store long-term memories. The emotional sectors of your brain are also more active during REM. Study subjects who learned new and complicated tasks on a particular day were shown to spend more time in REM sleep than usual on the same night .

Infants, children, and teenagers spend more time in REM sleep than adults or elderly individuals. The younger you are, the more time your body will devote to REM sleep during your nightly cycle. Predictably, REM sleep is when your brain focuses on breaking down unused neurological connections between different parts of the brain and reinforcing connections between brain sectors which communicate frequently. Therefore, it makes sense that developing brains in young individuals would spend more time in REM sleep as opposed to any other sleep stage.

What Happens When You Don't Get Enough REM Sleep?

There are many different physical and emotional consequences which you can suffer as a result of insufficient REM sleep. Those include:

Although REM sleep is one of the most important stages of the human sleep cycle, it is also the first one that gets sacrificed when our nightly rest is hindered in any way. In the short-term, insufficient REM sleep can leave you feeling groggy the next morning and tired all day. But when you compromise REM sleep, you'll end up sacrificing some of the other stages of sleep as well. If this pattern continues over many years, it'll prevent your body from washing away neurotoxins like beta-amyloid plaques. These plaques are responsible for brain diseases like Alzheimer's and Parkinson's later in life.

Even if you're getting the recommended seven to nine hours of sleep that adults need, you still may not be getting enough REM sleep - especially if you consume alcohol or certain other psychoactive drugs, such as cannabis - immediately before bed. When you finally get a good night's sleep without any of these substances in your system, it triggers something known as "REM rebound sleep". When rebounding, your brain spends a significantly larger proportion of your sleep cycle in REM sleep compared to the other stages. You will experience wildly vivid dreams, and you'll be more likely to remember them, too. In extreme cases, such as alcohol withdrawal, the brain's desperate need for REM sleep can trigger something known as delirium tremens (DTs). Basically, although you are conscious, your brain spontaneously forces itself into a REM sleep state. Delusions, night terrors. temporary psychosis, and involuntary muscle spasms are common with delirium tremens.

As you can see from the information in the previous section, you're going to want to avoid drugs and other substances which could potentially harm your REM cycle. Based on all of the sleep research data which is currently available, those substances include:

If you are really concerned about the health of your REM cycle, make sure you take a very close look at the product labels on the drugs you take - both prescription and over the counter - and make sure they do not fall into any of the categories above. Most sleeping pills, for example, do not identify themselves as antihistamines on the packaging; however, the active ingredient in antihistamines like Benadryl is the exact same substance used in almost all over the counter sleeping pills (it's called diphenhydramine, in case you were wondering).

You'll also want to make sure you follow good sleep hygiene practices. Things like electronic lights, loud noises, warm temperatures, and even sleeping with a pet in the room can all disturb your sleep cycle. And when your sleep cycle is disturbed, your REM sleep suffers first and foremost.

If you have trouble falling asleep in the first place, but you don't want to take a dangerous drug which could suppress REM sleep, look for a natural sleep aid instead. Any supplement that contains melatonin plus herbs and extracts which have a long history of causing drowsiness (lemon balm extract, hops, and chamomile, for example) Is ideal for helping you get the quality rest you need without sacrificing your REM cycle. Good luck, and sweet dreams (literally)!